A PRINCE AMONG MEN (AND WOMEN)

We half joke that Mamma, a non-releasable adult Great-Horned Owl who acts as a surrogate mother to orphaned baby owls at the SPCA’s Wildlife Rehabilitation Center, is our hardest working volunteer. After all, she mothers babies ‘round the clock and has raised more than 50 owl chicks since arriving years ago with a significant, untreatable wing injury preventing her release.

SPCA Volunteer Jeff Weill may have knocked Mamma off her perch. Figuratively-speaking, of course.

Jeff joined the SPCA as a volunteer in June 2016, when he was looking to enrich his lighter schedule after wrapping-up a career as a Department of Defense project manager. He was familiar with the SPCA, having adopted a Shepherd/Lab mix (a “Schlab,” one of our specialities!) from us when he was 19 years old, and that sweet companion was with him the next 14 years. 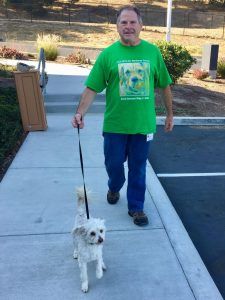 It’s safe to say Jeff found what he was after nearly two years ago. He lends his time, talents and legs as an SPCA volunteer six days a week!  During four of those days, he logs at least a few miles walking shelter dogs, giving them much-needed exercise and keeping them ready for their forever homes. When I pull into work every weekday, he’s here, walking dogs. We wave to each other and he goes about his business.

His remaining two SPCA volunteer days are spent with our Paws to Read program. SPCA Humane Educators or trained volunteers like Jeff, visit classrooms with a shelter pet and help students improve their literacy skills in a safe, compassionate environment. Studies show that a child’s literacy can greatly improve when reading to a kind and non judgmental partner. That describes Jeff with any of our homeless pets!

Each Monday, Jeff reads with 1st graders at Carmel River School. On Tuesdays, he’s with 1st, 2nd and 7th graders at the Dual Language Academy of the Monterey Peninsula. 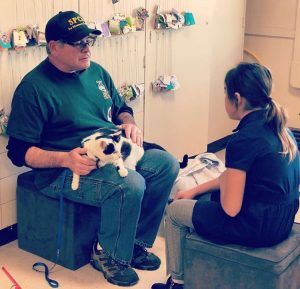 “Working on my own at Carmel River School & DLAMP is my favorite part of the week,” says Jeff, who hopes to be doing even more of this in the future, though he doesn’t have many days left in the week!

While he obviously loves animals and our mission, Jeff credits staff with shaping his experience. There’s Darlenne, in the SPCA’s Humane Education Department, who he says is “a great mentor…as professional and talented in mentoring as anyone I’ve worked with in my career.”

Then, there’s Jon in our Behavior & Training Department. Jeff lists participating in daily animal training classes led by Jon among his top two or three highlights since becoming an SPCA volunteer! Socializing a litter of five terrier puppies by hand-feeding them treats until they learned to trust people, and taking over the Paws To Read classrooms on his own (after initially being mentored), round out his top three SPCA experiences.

In all honesty, we couldn’t possibly name a hardest-working volunteer or volunteer of the Year.  We have so many who give so much of themselves and we greatly appreciate all commitments.

Jeff’s volunteer story is one of many. We hope it might inspire others since he sure inspires us!