Our feeds are filled with news related to shootings and fires. We can’t even catch a small break in the world of sports, an escape for many. The Golden State Warriors, who’ve brought nothing but joy, championships and parades in recent years, are fighting with each other!

We need something warm and snuggly. Meet Coco whose name alone fits the bill and that’s just the beginning. 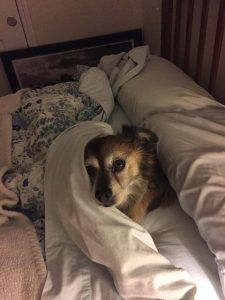 I first learned of Coco over the weekend. Her adopter posted this on our Facebook page:

Hi SPCA! I just wanted to give my most heartfelt thanks and gratitude to you for what you do… we adopted our beloved 12 year old Coco from you this past January and I can’t tell you how exponentially better our lives have been with her. I will send pictures too so you can see what she has been up to! She lives like a queen with my mom and I and she spends her days sleeping on the couch, playing with toys, sniffing things in our backyard, and going on lots of walks in our neighborhood (sometimes she walks 6+ times a day!) She even has a little doggy boyfriend in the neighborhood named Grayson… a little white fluffy dog who she cries to go see every time we pass his house. Thank you again and again for blessing us with our precious Coco!!!!

It’s not uncommon to receive posts and messages from adopters. We rehome thousands of animals every year. And, each one is meaningful.  Yet, this one really moved me and it was Coco’s age that did it.

Sienna and her mom opened their home and hearts to a senior dog and have clearly given her an amazing life. Adoptable puppies and kittens get so much attention — and we get that — but it’s so rewarding and special when people adopt our older pets, knowing they may not have several years together. Maybe just a few.

Sienna thanked us, but I reached out to thank her. She and her mom looked past the age printed on the kennel card and gave Coco the life of a queen. Coco’s clearly given them every bit as much in return and we couldn’t be happier for all of them!  Even Grayson, the fluffy new boyfriend!

Coco first came into our care in 2011, relinquished by her owner who wrote “moving: unable to take dogs with me” on the surrender form. This owner had three dogs — Coco and two 8-year-old Chihuahuas, one riddled with tumors — and surrendered all three to the SPCA.

We spayed Coco and treated her for sneezing, possibly the beginning of kennel cough.  At just five years of age (back in 2011), she could hardly be labeled a senior. Still, not everyone wants to adopt a 5-year-old dog. But, her big day came…her new forever home!  That was our hope. 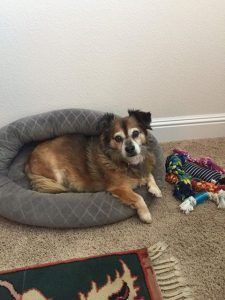 But, in late November of 2016, she came into our care again; this time she was found stray in Seaside. She was wearing no ID tag, but had the microchip we implanted at the time of her adoption. She also had a skin condition causing her discomfort. We thought we’d make a quick call and reach her owner, who would be ecstatic to have her baby home for the holidays. As they say, stuff happens. Heck, my own dog got out of the yard once. (though he was sitting by the garage door waiting for us when we got home!).

We tried to contact the owner, but the phone was disconnected. We sent certified mail to the last known address, waited and and gave Coco soothing medicated baths to relieve the discomfort. A week passed without any communication. We’ll never know what happened, but it appeared that her owner — or a new one we didn’t know about — didn’t care to find her.

In her relatively short life, she was with at least two owners, she’d been stray at least once and unwanted twice. Some dogs just have a black cloud and others luck out.

You know what they say about the third time, and there’s plenty of charm to go around in this story. She’s charmed her new family and she’s charmed in her new life. Coco’s new owners feel like the lucky ones. And, why shouldn’t the story end this way with the black cloud lifted for a little dog who only ever wanted someone to love her and commit to her. Her years may not be long, but they will be special. 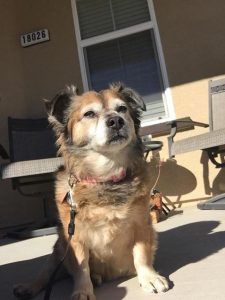