A WING AND A PRAYER

New people bring a fresh pair of eyes, another perspective on programs or services, opportunities others may not have seen or, some things less important. This falls into the latter category.

Most days, I take my shelter dog on a short walk to enjoy some of the SPCA’s magnificent, 200 acres. Our buildings sit on a somewhat flat five-acre bowl and the surrounding land is oak-studded, sloped and rugged, with meandering unpaved access trails. Truly, an amazing gift.

My walk takes me past our oldest structure — a wooden, two-story building which houses programs for kids and an office for our Humane Investigations team.

A weather vane featuring a hawk sits atop this building. Two interesting things about this weathervane. First, the hawk always points north-west. Either we have our our own Mystery Spot here, or it’s unable to rotate. Second, the hawk is missing a wing.  At least that’s what I thought looking up from the ground level. So, I did what any decent executive director would do. I climbed up on the roof for a closer look. No question, we have a one-winged bird. And, no one here knows its story. 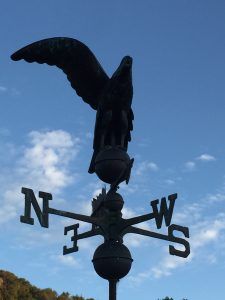 Somehow, the hawk seems fitting, a mascot of sorts. The SPCA for Monterey County is among just a handful of SPCAs and humane societies across the U.S. that rehabilitates local wildlife; most focus on cats and dogs. We routinely have hawks, owls, other raptors, songbirds and mammals in our care. Most come to us from Good Samaritans.  If they can be rehabilitated, we do this as quickly as possible to avoid imprinting, then release them near where they were found.

Naturally, some arrive with injuries so severe they can’t be treated. That’s difficult news for people who’ve gone out of their way to help. This was the case two weeks ago. A Good Sam in southern Monterey County found an owl entangled in barbed wire fencing. He cut the wire on both sides to free the owl, then brought the owl to the SPCA. Our staff was careful not to give a prognosis — some injuries aren’t evident until we examine animals closely — and we explained how the release would go down if it proved possible. The person keyed on the release since injuries were not obvious to him.

He called for an update and learned the owl had lost sight in one eye, had a damaged wing tendon, and that euthanasia was the only humane option. He followed up with an emotional email and asked why the owl couldn’t be kept in a cage to live out its life. He said he thought of the SPCA as an organization that cares for animals and finds homes for those in need and would now be rethinking our role.

Reading that message was a real gut punch. With help from our wildlife staff, I crafted a response. The owl, I explained, had a perforated eye globe, which is non-repairable, and several lacerations to its wing skin which is very delicate and almost never heals when we (or anyone) attempts to repair it on stressed, wild patients.

Some educational facilities do house non-releasable animals, but it is very difficult to find placement for a Great Horned Owl, since they are so common, and almost every institute that needs one already has one. Most animals placed this way have something about their temperament that allows them to acclimate to humans.  Usually they have some form of head trauma resulting in “dull mentation” or they were slotted as an education animal from a juvenile age. Our wildlife staff believed this owl would not have been a good candidate for placement due to its temperament (angry, adult owl) and the severity of its injuries. In addition, the State of CA which grants our permit for wildlife work, has deemed it inhumane to keep a wild animal in an educational capacity with an amputated wing or foot or enucleated eye, likely outcomes for this owl.

Lastly, I explained what life would be like for an adult owl contained in a habitat on our property. Wild animals view humans as predators, and as a result, every feeding, cleaning, or medical treatment is akin to a near death, traumatic experience for them.  To put an adult owl though that fear every day would be inhumane.

I ended my message by explaining to our friend that his actions prevented what surely would have been much suffering for this owl.  Then, I waited.

Within minutes, he pinged back. “Thanks for getting back to me, Scott, and for the information.  Very helpful. I have no ill-feelings toward the staff. I appreciate their work and compassion.”

As we saw here and see time and time again, taking the time to help people understand our work is truly as important the work itself. I’m lucky to be working with many outstanding communicators and teachers.