The name Marie Aronson isn’t familiar to many of you but she’s special to the SPCA.  When I walk through our adoption courtyard where potential adopters spend time getting to know our dogs — where the magic happens — I pass a bench with this inscription:  “In Honor of Deputy District Attorney Marie Aronson – Champion of Animal Rights.” Marie’s co-workers, colleagues and friends made a generous donation for the naming rights for a bench to memorialize her shortly after she passed away last year.

Marie, as a member of Monterey County’s District Attorney’s Office, prosecuted animal abuse cases for 15 years. When she first arrived at the DA’s office in the 1980s, she “self-identified” as an animal lover and protector, and actively pursued cases that SPCA humane investigators built and submitted for prosecution.

Longtime residents may remember a widely publicized animal abuse case in the mid 1980s where a little dog was sealed in a box and tossed over a cliff in Carmel. This wasn’t Marie’s first case, but among the first to receive significant publicity and it helped local residents understand our mission included investigating cases of abuse and cruelty.

The dog’s original owner was a 17-year-old living in his parent’s Salinas home.  The parents moved to the Bay Area and left him at the house to finish his senior year of high school. What could go wrong in that scenario, right?  He turned the home into a hang-out for his low-life friends. He rented a room to one (a convicted felon) who didn’t like the dog and said he was going to get rid of it.  The 17 year old didn’t stop him. He placed the dog in a box (lined with a Salinas Californian newspaper; this dated paper was the only initial investigative lead… there was no label on the box), sealed it, drove it to Carmel and threw it over a cliff.

Miraculously, the dog survived. A lady walking her dog along the beach heard the dog crying and he was soon in our care.

We offered a reward and found the perpetrator through the leads we developed.  When we learned he was a convicted felon on probation we sought out his vehicle at his workplace (Safeway in Carmel) and saw a weapon in plain view on the back seat. We called his probation officer who promptly arrested him at the supermarket. At trial, he claimed he was innocent and that someone else threw the box over the cliff.  The “someone else” admitted to this but, as a defense, said he didn’t know there was a live dog in the box.

Marie Aronson was the DDA on this case and suspected the convicted felon arranged for this lie in lieu of payment for drugs.  She immediately stood up and had the “someone else” arrested by the bailiffs. The convicted felon thought he was off the hook, but had forgotten about the weapon we found.  The judge didn’t and immediately sentenced him to nine months in state prison on the probation violation.

Hard to say we feel good with results from any of these court cases, but there was definitely some satisfaction with this one. 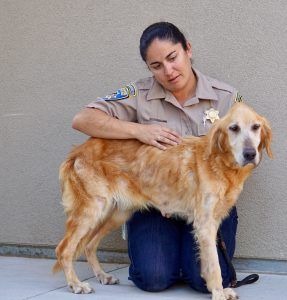 Kona’s case was successfully prosecuted thanks to the hard work and dedication of humane investigators and prosecutors.

The dog was rehomed with a new loving family and lived a wonderful life during his twilight years. Knowing how he was discovered, they named him Jacque for “Jacque in the Box.”

Marie Aronson led the charge against animals abusers for a long period, but we had other animal champions in the DA’s Office, including Marie’s fellow Deputy District Attorneys Linda Zetoony and Marla Anderson.  We credit their guidance for our investigators and dogged pursuit of cases for a near 100% conviction rate. Marie alone easily handled more than 20 cases built and submitted by SPCA investigators. About 15 years ago Marie became the filing deputy, so she saw all of our cases as they came in to the DA’s office and made sure they were filed and assigned appropriately.

Their legacy lives on.  Current Deputy District Attorneys Jeannine Pacioni, Robin Duffy and others under retiring DA Dean Flippo have taken the baton, and Monterey County remains among the worst places in the country for people who abuse and mistreat animals.

As they say, it takes a village. Good Samaritans willing to speak up for animals and report cruelty, dedicated and highly trained SPCA investigators, local residents who value and support this vital work with their donations, and prosecutors who take animal cruelty as seriously as we do.