Paul’s Pebble Beach home was filled with Scottie dogs. I tried counting them.

Scotties in paintings and photos. Scottie pillows, hand towels and figurines. I thought I found all of them, then noticed another wearing a lampshade; a Scottie was the decorative lamp base!

But, no real Scottie dogs scampering around or sleeping on couches, and for good reason.

Paul and his wife Marianne lost their last dog -- one of several they loved during 37 years of marriage -- just before they retired to our beautiful area in 2012. They were relatively young, healthy and active, and had been considering opening their home and hearts to another dog, maybe two. Then, Marianne was dealt heavy news.  A few years later, in the fall of 2017, Paul lost the love of his life.

Paul and Marianne were generous SPCA supporters. Marianne had a huge soft spot for animals and children; she volunteered at the Lucille Packard Children’s Hospital at Stanford and the National Center for Equine Facilitated Therapy in Woodside before their move to the Monterey Peninsula.

The SPCA was in the process of scheduling a campus tour, to show them how deeply they were impacting our animals and programs, before we knew of Marianne’s health. Soon after she passed, Paul made a significant gift in Marianne’s memory, and called about the tour.

It’s safe to say Paul made that call out of a deep love and respect for Marianne, a way to honor her and one of her passions. It’s also safe to say he found much more than he expected the day he visited. Minutes into the tour, he seemed intrigued. By the tour’s  end, completely enthralled.Today, he’s board Vice President and chair of the Development Committee, a tireless champion for our nonprofit mission and work.

Back to the Scotties. A year into his SPCA board term, Paul knew he was ready for a real one in his life and home. He was thinking of a young dog, but not a pup. Preferably female. Well, as an open admission shelter, we get what we get. It could be months or years before a purebred Scottie matching this description arrived. 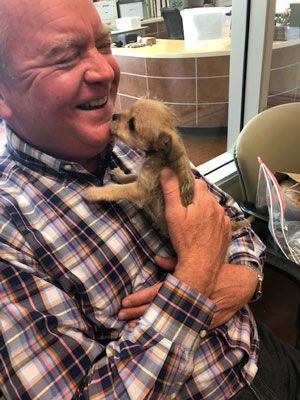 We never let that get in the way when we know someone who has so much to give a pet and we know one of our pets will give them every bit as much in return. When Paul was on site for a board meeting in the spring, we literally placed a tiny mixed-breed puppy in his arms. Such a precious moment. He was a kid at Christmas, a proud dad, a man who declared his “ride or die” all in one.

Paul and Marianne had talked about adopting two dogs and naming them Lucy and Ricky, so, of course, this little one became Lucy and has the life you might imagine.  She’s on his lap or at his side. And they get out often to enjoy our lovely area. So much that Lucy has a fan club at the Cypress Inn!

I look forward to Paul’s updates. Of all the work we do, not much is more special than facilitating adoptions between retirees, seniors and pets. The people have time, patience, stability, resources, love to share and prior experience. In return, pets give unconditional love and companionship. They bring joy and a new energy to a home. 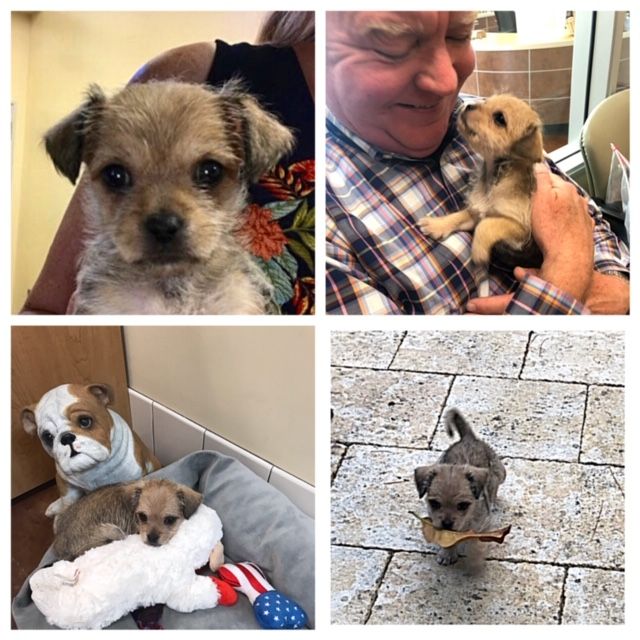 Placing animals with adopters is a huge responsibility. It’s also among our greatest rewards. We’re not perfect with our matchmaking, but close. I came across a lady who must have been in her 80s in our adoption area. She had a warm smile and twinkle in her eye that let me know I could play with her a bit. When she mentioned that she needed to check with her husband about a cat she had her eye on, I joked “If it doesn’t work out, just get a new husband!  The divorce rate is above 50%, but our adoptions work out well over 90% of the time.” Without missing a beat, she shot back, “I did -- he’s number three!”

She adopted and husband number three approved as far as I know.

The Scottie dogs still fill Paul’s home. But, now there’s so much more. DNA tests determined Lucy is  37% Chihuahua, with some Shih Tzu, toy poodle, and “other” terrier. One thing’s for certain: she’s loved 100% of the time.