I don’t know exactly why, but it wasn’t until I was well into my 40s that I began thinking about how my Dad introduced me to animals, which would eventually lead to my career choice.

Baseball was our main connection, the obvious one.  We played catch all the time and went to more Giants games at Candlestick Park than I can remember.  He coached my first few little league teams, then backed off as I got older, but was every bit as interested and never the obnoxious “Little League Dad.” In college, when it became clear I wasn’t going to be the Giants’ next third basemen, this seemed harder for Dad than me in some ways. 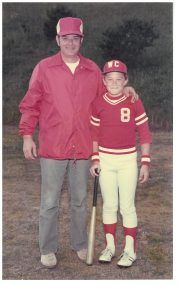 For years after this until my Dad died much too young at 60, I was a young adult “retired” from baseball trying to figure out our common ground.

Today, it’s obvious. We had animals. The idea for our first dog Clancy, a Dalmatian, must have come from him – thechoice for a firefighter, which he was in South San Francisco. Even though he was ready for this addition to the family, I was not.  Imagine Bam Bam from the Flintstones with a jacked-up Dalmatian pup.  Clancy, I’m afraid, lost those early battles, which is why my parents responsibly gave her to our vet who quickly rehomed her. 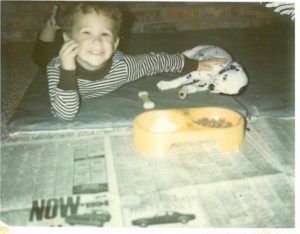 When I was 6, my drawing of a poodle won the San Francisco Chronicle’s Junior Art Contest and brought a whopping $2 prize! Now, a firehouse in the 1970s was a manly place, a squad of Marlboro men and James Rockford types who all had nicknames.  Moon, Ski, Lefty, Wild Bill, Mac. Poodles weren’t exactly the dog du jour for this crew. Still, Dad proudly taped my art contest clipping to his locker.

A year later, we visited a fellow firefighter whose yellow lab hooked up with the neighborhood pointer and had a litter of pups. Dad let me pick ours, and I went for the one with a white tip on her tail, white chest and paws.  Gingerwas the family dog, and this boy’s best friend.

When Ginger died during my senior year of high school, Dad surprised me by offering consoling words. “Ginger is now in heaven with your sister.”  This was deep. My Dad came from a generation of men who didn’t share feelings, the ones who grew up with John Wayne as their hero.  Why use words when a look, nod or back slap will suffice.

My Dad was a ballplayer, too, but like his Dad, a cowboy at heart. He grew up in San Francisco’s Portola District where he and his dad would ride their horse and pony from their home to the Cow Palace back when it was a riding club.  His parents and the extended family of aunts, uncles and cousins called him “Tex,” short for Texas, a nickname that stuck through adulthood.

Boy, he would have loved my current workplace. Visitors to the SPCA’s 200-acre rural campus drive right by our rescue horses the minute they turn in off Highway 68.

My Dad introduced me to many things. The Three Stooges, rummy, San Francisco history, colorful language, Italian culture, Frank Sinatra, fishing, a love of baseball. And, a love of animals. Many people thought he also gave me curly hair, but his was a perm. Hey, it was the 70s when perms were cool, even in the firehouse and even among guys with Archie Bunker’s fashion sense.

I realize my audience doesn’t include many young dads.  But, if you know one, please share this: introducing your kids to pets and animals – especially getting that first family pet together — is a pretty great thing for a dad to do, and can be every bit as indelible as those early games of catch, fishing trips and driving lessons.

In my SPCA office, the 1973 San Francisco Chronicle poodle doodle hangs next to my daughter’s striking watercolor painting of koi and the latest addition, my 7-year-old son’s ceramic owl wall-hanging, which actually looks like an owl! Both kids will be back at SPCA Animal Camp in a few weeks.

They are well on their way to being animal lovers and I’m happy I had something to do with that. Next up, the Stooges or Sinatra!