It took nearly two years, but the final piece of being a tried and true SPCA employee was thrust into my arms this summer when a co-worker brought a surrendered puppy to meet me after I let it slip that my family was looking to adopt.

I did tell co-workers we were interested in a dog. This powder puff looked and felt more like a guinea pig with piranha teeth! The mostly white with black patches, 8-week old Shih Tzu mix barely moved the scale at 4.1 pounds. When curled up asleep, she looked like an ice cream sundae without the cherry on top. 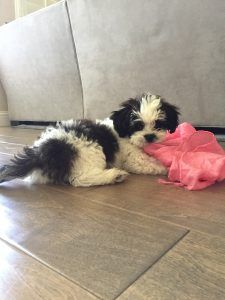 On Wednesdays we wear pink…..

Summer took a welcomed and wonderful turn when we made it official and adopted. The entire family is in love with JoJo. Well, all of us except Murray, our almost 11-year-old dog.  All JoJo wants is to play and engage with him. I’ll paint a picture of this little dance. Murray is like Eeyore, from Winnie the Pooh. JoJo is Tigger’s personality in Roo’s tiny frame. She pogos up and down reaching his eye level at the top of each leap as if saying “I’M HERE, PLAY WITH ME. I’M HERE, PLAY WITH ME!”  He’ll stand his ground and just turn his head from side to side. “I’m dead to you, kid. Talk to the paw!” Every now and then, he’ll give a low grumble when the little pest doesn’t get his subtler messages. 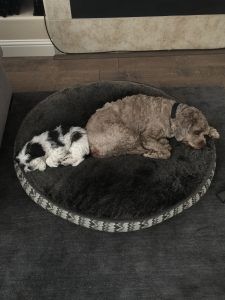 JoJo and Murray, cheek to cheek.

Murray’s world aside, JoJo’s filled the home with joy and laughter. She’s also filled it with numerous tootsie roll-sized accidents (she’s getting much better) and…toilet paper! Who knew she would reach up to the roll, pull down with her teeth, then “tp” the entire downstairs.

JoJo was surrendered to the SPCA by her former owner along with a littermate, the puppies’ mom and an adult male dog we were told was not the father. Mom is a Shih Tzu. Dad’s somewhat of a mystery. Since I know the person who adopted JoJo’s littermate, we split the cost of a DNA test. We used her pup’s spit and cheek cells and sent them off to the lab geeks for testing. Results came back 50% Shih Tzu, 25% Chihuahua, 12% Pekingese and 12% mixed. Since there is no clever mixed breed name for that combo (Shichipeekzu does not roll off the tongue and sounds like a place I visited in Mexico), we just call her a Shih Tzu mix. 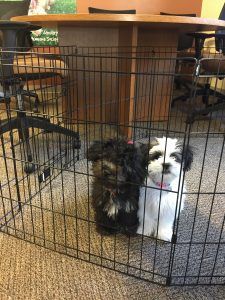 I’ve read different things about the Shih Tzu’s origin. One story is that it was originally bred several hundred years ago by Tibetan lamas (monks, not the animal) to resemble little lions. I’ve also heard Shih Tzus described as dogs who exist solely to be loved and to love right back. I’m not sure about the monks, but the lovin’ part is spot on.

I’ve never had a small dog or toy breed.  I always saw myself as a big dog guy. In fact, when we adopted Murrayalmost 9 years ago, I felt like I was walking a toy breed — and he’s 40+ pounds.  I was used to being on the other end of the leash with our 90-pound Lab/Newfoundland (or “newfoundlab”). 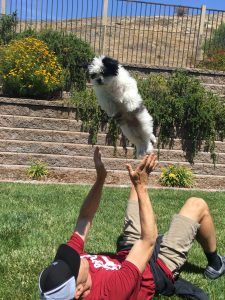 JoJo’s been a dream. She tolerates nails trims and bathing. She plays hard, but settles easily. She’s great in the car and has loved all strangers. The kids can easily handle her and have been so gentle. Raising a puppy takes time and can be challenging, but that was all expected.  The first few walks on leash were harrowing. She would dart back and forth crossing our path like she was trying to get underfoot!  And, we need to carefully manage meal times since Murray has food allergies and a special diet. Naturally, he craves her food and she wants his. It’s all small potatoes compared to what she brings. 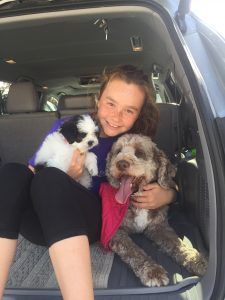 People often ask “How can you work for the SPCA and NOT take home any animals?” I can’t. It took a while, but I’ve joined the SPCA’s special group of people who’ve opened their homes and hearts to a shelter pet.