Eric Clower, the SPCA’s super-talented Maintenance Manager, oversees all aspects of our 200+ acre campus. Our resident MacGyver tackles complicated HVAC systems, maintains a small fleet of vehicles, and chases down water intrusions from rooftops in a single bound. He didn’t wake up last Wednesday morning thinking he’d be building a turtle platform. But, it’s what he did and it’s among the many reasons I love this organization.

The backstory: our equally talented Humane Investigations Supervisor, Marty Opseth, was out playing a round of golf. Knowing he was with the SPCA, the golf course staff brought him their animal-related dilemma: turtles in their man-made pond were having trouble sunning themselves, clinging to the pond’s steep edge. Aquatic turtles, as some of you know, need sunlight. They spend the good part of their day basking in it. Basically, they live the lives of Kardashians. 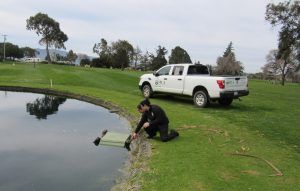 In all seriousness, the sunlight helps turtles raise their body temperature to fight germs, keeps their shell healthy and helps under the hood as well, preventing metabolic bone disease. I don’t know if the golf course staff knew all this, but they knew their amphibious residents were struggling to bask, and they called on the SPCA.

We veered slightly out of our lane for this one. We care for and rehome stray and unwanted domestic animals and rehabilitate then release sick, injured and orphaned wildlife. These turtles confined in the golf course pond are non-native, red-eared sliders like the ones people can buy in pet stores. As such, they don’t check either of these boxes, though we do rehome red-eared sliders surrendered to the SPCA. 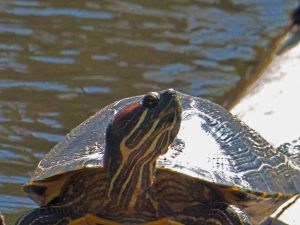 Marty consulted with our Wildlife Department staff which quickly pulled up turtle platform instructions online, then walked the plans to Eric, who banged out a sturdy, Pinterest-worthy turtle platform which was quickly donated and installed. From what we can tell, the turtles are giddy!

Eric’s daily punch list is essential to our success and keeps our operation humming. Underneath the ball cap and several days of growth, there’s an animal softie who’s taken a few SPCA animals, including a special-needs cat, into his family’s home. Marty, in his investigative role, encounters neglected and abused animals and sees the worst in people who’ve let them down. This was a nice “win” for both of them — and for the turtles.