The SPCA for Monterey County — © 2023 All rights reserved. 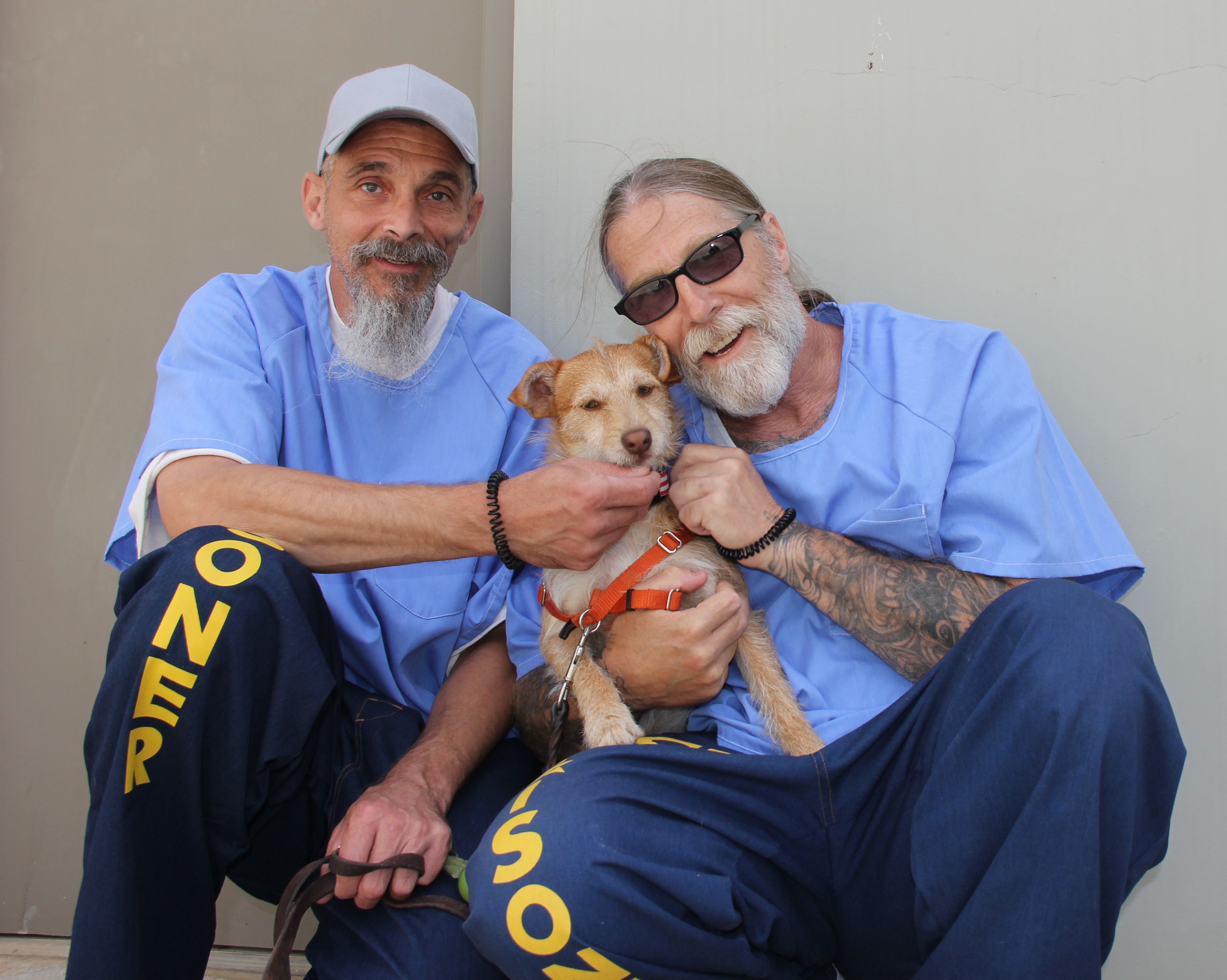 I’d make a lousy prison guard. I spent a few hours with the SPCA’s Ruff Start program which pairs shelter dogs with level-four inmates inside the Salinas Valley State Prison in Soledad.  These are tatted, hard-looking men; central casting material for any movie with a prison yard scene. Upon meeting each one and seeing them interact with “their” dogs, I thought to myself, “He’s a really nice guy!”

Fortunately, I run the SPCA, not a prison.

The dogs our Animal Behavior Department selects for the Ruff Start program need intensive, focused work before they can transition into a loving home. Some are shy and withdrawn, others are anxious balls of fluff or overly exuberant (picture Dino the Dinosaur “greeting” Fred Flintstone) and a few joined the program to recover from surgeries. We pair them with screened inmates who’ve been infraction free for a lengthy period. Our dogs live with a pair of cellmates for eight weeks, they graduate, then we send another group of dogs off for their Ruff Start. The first grad was a khaki-colored dog we named Jake, or, more precisely, Jake from State Farm. To date -- in just over one year -- 29 dogs have graduated and been transitioned into permanent, loving homes.

Three times each week, our staff and two dedicated and trained volunteers -- Becky and Trisch -- visit the prison to work with the men. Obedience classes are really about training people. Using only positive-reinforcement methods, we’re molding people who have become an extension of our volunteers and staff. The thing is, we can’t possibly give 24/7 attention to all our dogs; our staff and volunteers go home. The hand-picked Ruff Start inmates have nothing but time to give. And, as we’ve learned, they also have love, compassion and patience. They laugh at the dogs and at themselves, cheer each other on and rib each other just as friends do. Men from different backgrounds who, in another life, would ignore each other or far worse.

The dogs are different by the time they graduate from our Ruff Start program, a cross between boot camp and finishing school. They leave better behaved, more confident, friendly (or tolerant) of other dogs and people. Some heal physically, while many heal emotionally and learn to trust again. Others experience living with a loving human companion for the first time in their lives.

The running joke is that our only challenge is finding permanent homes as good as prison!  While in Ruff Start, the dogs have constant companionship with two humans; several daily play sessions, off-leash, with other dogs;  three weekly classes taught by the best trainers around;  and readily available vet care should they need it.

Many have adopters lined-up before they graduate, often by way of the prison. The chaplain adopted Mollie, a Dachshund mix who began the program as a shy, fearful dog. A prison nurse, several guards and family members of inmates have also adopted. If the dogs aren’t spoken for prior to graduation, they come back to the SPCA’s adoption center where we proudly promote them as Ruff Start grads -- as something truly special.

I like to believe people can change, that prisons can and should be institutions that punish and rehabilitate. I know this: the men who’ve worked with our dogs since May of 2016 when the program launched, have changed and been deeply impacted by Ruff Start. They are starved for any information we can provide about dog breeds and training principles. They cry during graduations. Some say that their work with the dogs made them feel human again and allowed them to do something positive with their time. Others say it made them feel something for the first time in decades.

Recently, we lost a trainer, which doesn’t happen often, given their lengthy sentences. He was moved to a lower level unit for good behavior. We said goodbye to Michael, but saw, once again, how the program is impacting the inmate handlers. I’ll close with a few lines from his hand-written letter:

Who would have thought the change simply training and loving these dogs would give to anyone--but I am writing this so you will always know that you saved me. I had forgotten I knew how to love; how to be happy; how to feel sad and cry and know it’s ok when something is so bittersweet that the happiness hurts.