Early February is a time for love letters and this one’s for the moppy lug sleeping near my feet as I’m typing.

Murray, you came into our lives 10 years ago after being taken to the local shelter by your first family; they had three dogs plus four young kids and needed to move from a house to an apartment. Something had to give and it was you. Your previous owners said you lived outside, that you were a poodle mixed with the dog from the Beethoven movie, and that you liked tortilla chips!

You had a near impossible task joining our family. You followed the world’s best dog, at a time when we hadn’t stopped grieving his loss. He was my wing-man through single years, marriage and the birth of our daughter.

But, we didn’t wonder whether we had room in our hearts for another dog. Our only burning question was your breed or breeds. With taupe Weimaraner coloring, thick droopy ears, a long, swoopy tail, and a curly, non-shedding coat, it was anyone’s guess -- and everyone guessed!

“He’s a Spinone,” a purported breed expert told me with great certainty. I’d never heard of a Spinone. It sounded like Italian ice cream. 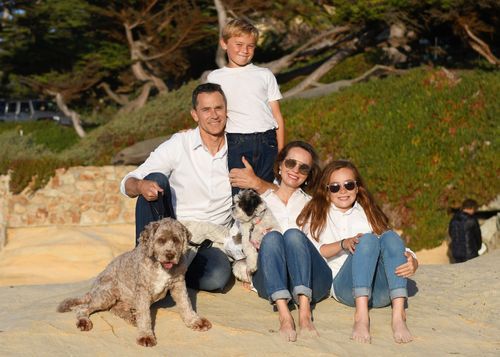 “This might sound weird, but I think he’s a Lagotto Romagnolo,” said another.  Again, I had to Google it. Wikipedia told me Lagotto Romagnolo is a "lake dog from Romagna, Italy.” Google images showed an uncanny resemblance to our new addition, Dogo Delucchi. The Lagotto was originally a gun dog, specifically a water retriever, however, it is used to hunt for truffles. The entry was referring to the super pricey mushrooms, not the chocolate kind. We really didn’t know much about Murray’s tastes.  I mean, he once ate a full diaper, which may have been as much of a delicacy to him as truffles.

Most people guessed Labradoodle or one of the other doodles gaining popularity and fetching $3,000+ price tags.  “What did he set you back?” they’d ask. “Let’s see, with my employee discount, his adoption fee was $65 bucks,” I’d proudly say. “Shelter dog!”

We couldn’t rule out labradoodle, Lagotto or Spinone, and I was digging the idea our dog had Italian roots, like me.  Only thing was, we named him Murray, after my maternal grandfather Murray McWilliams, a loud and proud Irishman.

Back to my love letter...

For years, we lovingly called you an Accidoodle (accident + poodle), saying you were the product of a neighborhood hook-up, not a deliberate pairing. People got a kick out of that.

Curiosity won and we shelled out $80 for a DNA test. We swabbed your cheek and sent the q-tip off to the lab geeks. Six weeks later, the email arrived, like that moment when we learned our first born was going to be a girl. It said you were predominantly Springer Spaniel, with Poodle and Australian Shepherd.  Didn’t see that coming, but it’s now part of your story. 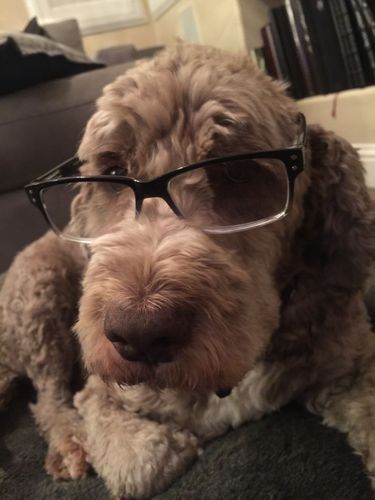 You, our beloved Aussie Springerdoodle, came with me to work everyday and slept indoors always.  Because of your itchy skin, you licked your paws and your butt -- a lot -- which didn’t make us excited to get kisses from you. Lucky for you and us, a new allergy medicine came out and worked wonders.

Early on, I bought electric clippers, and watched Youtube videos to save on $95 professional grooming sessions. You stay relaxed for these amatuer jobs and seem proud of the results. Maybe just me projecting? 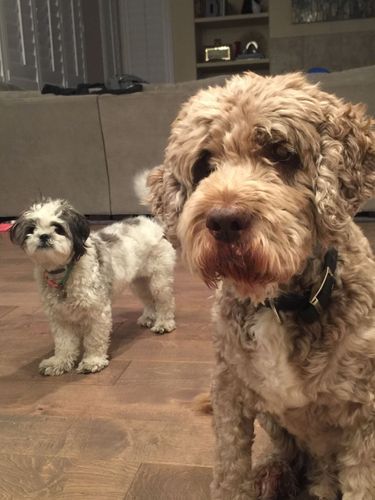 You didn’t mind when baby number two arrived; a boy, like you. Always gentle, always  tolerant. You received less of our attention, but not less of our love. We had two kids to raise, and you helped, always eager to pick-up after mealtime.

When you reached 8, I turned 49, both entrenched in middle ages and a comfortable routine, then we moved. I was so proud to bring you to my new workplace, the SPCA, where you had a spot in the corner office and new friends.

Soon after you turned 10, we threw you another curve: a tiny Shih Tzu mix puppy, adopted from the SPCA. Once again, you took it like a champ. You share your bed -- and our attention -- with the little pest. She licks your face incessantly (which we learned was a submissive sign). You never mind the little one. 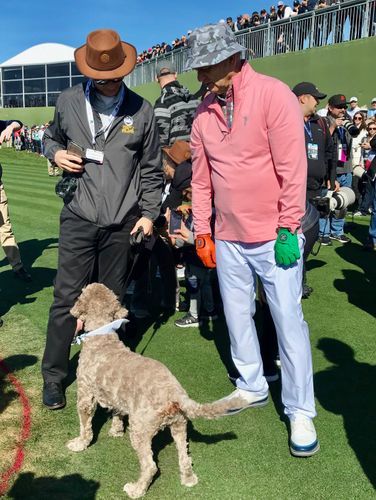 Last week, you got something the little one didn’t get. You met Bill Murray! A small team from the SPCA was invited to the 18th tee at Pebble during the 3M Celebrity Challenge to cheer on Team Eastwood. Captain Clint named the SPCA as his benefit charity and made our day when he earned $10,000 for the animals. The gallery called out for Clint, Bill and YOU, and we happily obliged with fairway visits!

“What is he?” several asked. “Is he up for adoption?” they called out.

Why let Bill Murray steal all the good lines.  “He’s an Accidoodle,” I said. “And, he already has a loving home.”