As I often say, we see the best and worst in people in our business. Take this past week, which started with this email message:

Wow. I haven’t seen a message worded so bluntly, with so much detachment. As the only open-admission shelter in Monterey County, we responded as we always do, informing the owner that we should be seen as a last resort after they’ve exhausted other efforts to rehome their dogs…that we rehome all healthy animals, that we make well most animals with health and behavior challenges, but can’t make any promises. We assess animals carefully and individually.

Later in the week, someone sent a link to an article about a Louisiana-area animal shelter selling its animals slated for euthanasia to an LSU lab — which uses animals for testing — and counting the transactions as adoptions, presumably, to make their record of rehoming animals look better on paper.

Sadly, this didn’t come as a huge surprise. We learn about shelters around the country doing other suspect things to impact their Live Release Rate. Rehoming animals with known bite histories, warehousing animals until they die, transferring animals to shady rescue groups (many rescue groups, including those in our area, are fantastic), or simply not admitting animals that require medical care or behavior attention. One shelter director resigned amidst claims he falsified animals’ records in his organization’s database so they would appear as owner-request euthanasias and therefore not count as animals the shelter could have saved.

By the week’s end, I really needed something positive. It came two days later, in a double dose.

A dear and compassionate SPCA supporter toured our kitten nursery where we care for the shelter’s most vulnerable residents. Keep in mind, we creatively turned a flexible space never designed as a nursery into one last year to increase our life-saving work. But, we were finding it challenging to maintain the temperature at an ideal 75 degrees, despite installing window tinting, reflective window panels and a dehumidifier. 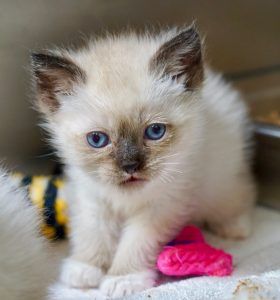 Our supporter left this meeting with our maintenance manager and a staff veterinarian by giving us and the animals a five-figure-commitment to fund AC units for the nursery and an adjoining cat holding space. The modifications will take place soon and we will no longer worry that temperatures are causing stress, suppressing the kittens’ appetites which can make them more susceptible to illness or less responsive to treatment.

Then, just yesterday, we rehomed Stella, a mostly blind and partially deaf Catahoula we’d been caring for since February 23. When Stella arrived she would continually spin in circles; she developed this habit when her former owner kept her crated at all times, mostly because they didn’t know how else to deal with this sweet, young dog’s special needs. 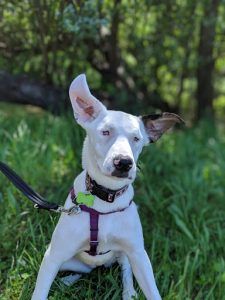 She became one of our growing number of TLC Program successes, benefitting from one-on-one work and small controlled doggie playgroups under our talented Behavior Department team’s direction and time in our Ruff Start program, which pairs shelter dogs with Salinas Valley State Prison inmates.  Thanks to their loving care, Stella can finally walk in a straight line, and she walked right into an incredible new home.

We take our successes in big doses — our nursery will help hundreds of kittens this spring alone — and single servings, like Stella’s placement with a Hollister family!  Thank you for caring and making our vital work and programs possible. It’s all only possible thanks to you.