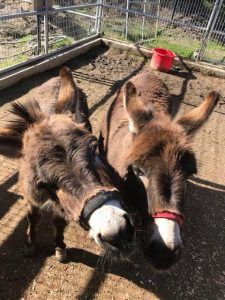 Two weeks ago, SPCA Facebook followers met Pecan and Chocolate, two miniature donkeys available for adoption. Soon thereafter, so did the rest of the world. Well, not exactly, but a whole mess of them did. The donkey post reached 435,000 people, it was shared 2,400 times and received 2,000+ comments.  In our world, that’s viral. It’s bigger than learning the name of Kim Kardashian and Kayne’s baby or the “This is Us” spoiler alert.

The social media buzz generated too many wonderful adopters! When the donkey dust settled, we had received hundreds of communications from potential adopters.  We weeded out some, like the few who were appalled to learn we had an adoption fee or those from out-of-state who wanted us to deliver Pecan and Chocolate to them. No, Uber was not an option!

In all seriousness, the number of people willing to open their homes and hearts to this pair amazed us. Adopters near and far with a variety of backgrounds and plans for the donkeys. Some wanted them as grazing or companion animals, some inquired about working animals or driving animals and multiple people asked about adopting them as therapy animals. 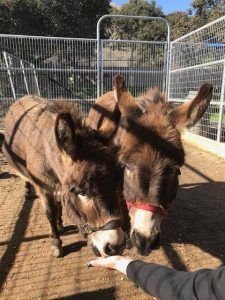 In total, we felt we had 70 good options after communicating by phone or email with at least three times that number.  Then, we held in-person interviews with a dozen or so.

In this strange version of The Bachelor, the final rose went to a local family. All of our post-adoption communication and the many happy photos of Pecan and Chocolate in their new digs with their adoring family members only confirmed our choice.

Then, something really cool happened.

One of the families who made the cut for an interview had a change of heart while visiting our barn area, which regularly houses dozens of animals. Today, we have roosters, pigs, horses, bunnies, a 25-year-old white Welsh pony named Sylvester with unbelievable before/after photos, and a calf.  We often have adoptable goats, hens and ducks.

This family’s second thoughts meant everything to another SPCA barn animal who had been awaiting adoption for 1½ years. Best for me to share their words, from an Instagram post.

“Welcome to your retirement Diego. You know when you head 3 hours away to look at mini donkeys one weekend, but you find something that needs you more? Well, that’s what happened to us. When we met Diego and learned his story, we knew he had to come home with us. Diego has been in the loving care of the SPCA for Monterey County sine September 2016! He was found as a stray horse running on the the road. Later, the owners came forward and said they did not want him anymore. He was lame and could not hold an adult rider….Diego is a 9 year-old Paso Fino who was used for parades and as a dancing horse. He has suffered injuries to both rear suspensory ligaments. He’s in his prime and unrideable…not most people’s dream horse. He’s ours now, and will live out his years in comfort and only knowing love. We are excited to have him as part of our horse family. Welcome home for good, Diego.” 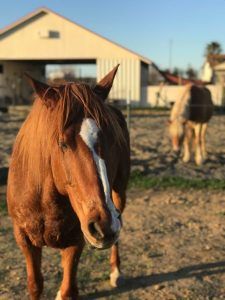 A week at the SPCA does not end any better than this!