Last Thursday, SPCA staff attended a hearing for the man charged with lighting on fire and torturing his family’s beloved dog. We prepared media statements for any possible outcome and heard the one we had hoped for but didn’t expect. Devonte Sirwet pled no contest to three felony charges and two strikes. As part of his plea agreement, he’ll be sentenced next month to six years and eight months in state prison. 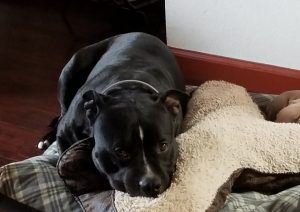 Kato, before his tragic death.

Is this justice for Kato, the dog brutally tortured?  I don’t know — it depends on who’s asked. For the people who cared for and loved Kato, I imagine this gave them some sense of closure. They didn’t address media following the hearing and who could blame them.

In his quick update to staff immediately following the hearing results, our Humane Investigations Manager added “best case scenario.”  And that, truly, is about the most we can say. That, plus our District Attorney’s Office cares deeply about animal welfare cases.

A veteran Monterey County prosecutor called this the most horrendous case of animal abuse he’d ever seen and, for the first time, shared the abuser’s motive: to exact revenge on his mom for kicking him out of the family’s home due to his anger issues and drug abuse.

A Deputy District attorney who worked on the case sent a message thanking us and noting she was extraordinarily proud to be part of the team which included SPCA Humane Investigations staff.  Our team felt the same.

Animal abuse and neglect cases can be handled several ways, depending on the community in which the crimes occur. Sadly, they can receive no attention or token efforts that lack professionalism or any sense of urgency. Law enforcement personnel in some communities are overwhelmed with crimes against people and most don’t have private animal welfare organizations shouldering this work the way the SPCA does in Monterey County.

Fortunately, our community would never allow for this and neither would we. We respond to every animal abuse call and fully understand the Cycle of Violence, the link between crimes against animals and crimes against people. The SPCA has willingly employed specially trained humane investigators for decades. This work we choose to take on is made possible only by donations. Abusers are ordered to pay restitution to the SPCA (for expenses incurred, such as emergency medical care for animals we remove from harm’s way), but we see just a fraction of these amounts and have few legal means to collect. 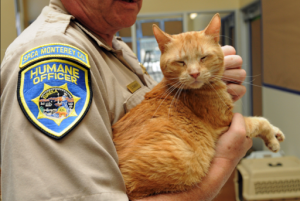 This sweet cat was rescued from a life of neglect in the home of a hoarder.

We received kudos when last week’s news broke, but this isn’t always the case. In fact, with some regularity, local residents or groups with some familiarity of a situation (but far from all the facts!) express disappointment, even outrage, that we didn’t take animals from someone. To them, this is the only response. The SPCA may very much want to do this, but there’s what we want to do and what laws allow us to do and often a wide gap between the two.

Make no mistake, when we learn of a dog relegated to a back yard and a lonely life devoid of attention or affection from people, that is tragic. If we learn about someone housing a large number of roosters, we naturally suspect cockighting, an awful blood sport in which roosters are fitted with razors and pitted against each other in an enclosure, usually until one kills the other. But, sad situations and suspicions alone don’t give us legal grounds to take someone’s animals. 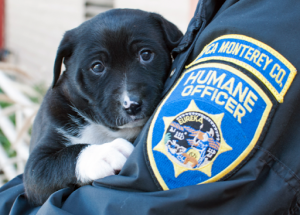 This underage puppy was rescued by SPCA Humane Officers.

On several occasions, when we’ve had the legal grounds to take action, we’ve seized fighting birds and filed reports which led to convictions. We regularly order owners to seek immediate veterinary care when their animals are injured or suffering. We inform owners that surrendering their animals to us is an option; this is often much better for the animals than a legal seizure which can become mired in legal proceedings and cause extended shelter stays for the animals while adopters are ready to open their homes and hearts. By all accounts, Kato had that loving family. No one could have intervened in this tragic case. The person who tortured Kato won’t harm another animal. I can’t say that’s justice for Kato, but it’s justice.